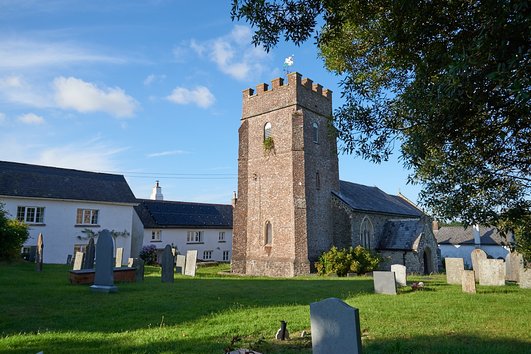 The Nymet-St-George Church nestles at the heart of George Nympton.

For details of the village church services and other activities within the village, please see the latest Newsletter.

PLEASE NOTE THAT DUE TO THE CURRENT CORONOVIRUS CONCERNS

the church is closed until further notice.

The Manor and Parish of Nymet St George

The manor or estate of Nymet appears in the Domesday Book of 1086 (miss-spelt “Limet”) among the grants of land to Odo Fitz-Gamelin, who became one of the largest land-owners in Devon. The neighbouring estates of Nymet Regis (King’s Nympton) and Nymet Episcopi (Bishop’s Nympton) were held by the King himself and the Bishop of Exeter. Nymet is an ancient Celtic word for a holy place or sanctuary and the early Christian Church often super-imposed its places of worship on pagan sites.

The patchwork of rural parishes developed slowly and two hundred years passed after Domesday before the dedication to St George appeared, indicating the existence of a church. A tax roll of 1288 contains the entry “Eccl’ia. De Nymeton Sci. Georgij: £2.0.0” (Nymet St George Church £2.0.0.) and John Parson of Nymet St George is named in a roll of 1297. The question is: how much of that church still exists? When the building was listed in the 1970s the schedule included the words: “the interior of the porch has…..an unusual inner door-frame with a deeply-moulded triangular head, possibly C13 in date”. The sanctuary ring in the oak door is possibly also a relic of this first church.

The church we see today, consisting of nave and north aisle separated by pillars with finely-carved capitals dates from the late 15th Century, probably between 1470 and 1490. It is hard to understand how such small parishes of barely 100 inhabitants with no rich patron could afford such edifices, which would have included carved woodwork, painted ceilings and stained glass. Though the ceilings of the nave and chancel have been restored the north aisle still has its original carved bosses. There was an ornate wooden screen separating the nave from the chancel, of which some pieces remain in the carved panels on the front of the north-side choir-stalls, and the beam across the tower arch which still retains its original colouring. Some fragments of old stained glass were found embedded in the stone-work when the chancel was rebuilt in 1882 and they were inserted in the upper lights of the new east window. The font, described as one of the finest in Devon, also dates from the 15th Century. Though the building is constructed of random stone, easily obtainable locally, the pillars and the font must have come from some distance away and can only have been brought in by packhorse. 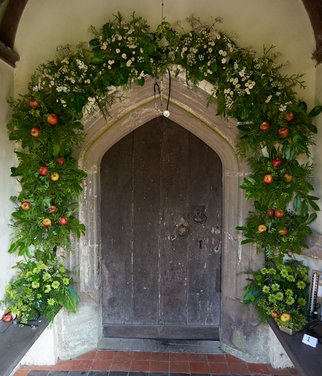 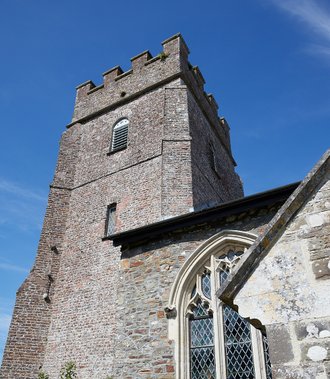 In 1668 the church wardens reported to the bishop: “our steeple is unrepaired and our bells are crashed”. Clearly there had been a disaster, probably a lightning strike, but there are no parish records before that date, as they were destroyed with the tower. In 1673 the unusual decision was taken to rebuild in brick and the work is recorded in detail in the parish accounts. There is no record of the reason for using brick. George Harris was paid £46.0.0 as master builder and James Moore £22.5s.4d. for baking the bricks on the village green. The bricks are quite uneven in size and the result in both beauty and durability is great tribute to George Harris’ skill. An entry in the parish register records: “The Tower of George Nympton was built with brick in ye year of our Lord 1673 Amos Nott gent and John Pawle then Church Wardens”.

An inventory of church property taken on the accession of Elizabeth I in 1558 shows: “Nymett Sancti Georgii iij belles in the towre there” and these had probably been hung during the fifteenth-century rebuilding. Recasting the “crashed” bells was undertaken at Romansleigh by an unnamed travelling founder who came to recast the bells of that church at the same time. The broken pieces were weighed and re-used and three new bells cast. There is another note in the register: “The bells in georgenympton Tower were cast ye fourth day of September in ye to and thirtieth year of the Reign of Charles ye Second and in ye year of Our Lord 1680 William Karslake and John Hele then churchwardens”.

There were some major repairs to the fabric in this period from 1680 to 1880: in 1758 the roof and the pillars between nave and aisle were taken down and rebuilt and the bell chamber was given a new roof in 1814. One lasting and still visible addition was the vestry on the north side. On the other hand some important changes to the interior of the church in this period have left little permanent trace. The accounts for the years 1713 to 1738 have been lost but the period saw the installation of box pews, the construction of a gallery across the west end, and of a three-tier pulpit topped with a gilded angel (now surmounting the organ).

By 1880 the church was in a very dilapidated state and the south and east walls of the chancel had to be completely rebuilt, using dressed stone contrasting with the random stone of the old nave. A new stained-glass east window was installed using the fragments of medieval glass in the upper lights and a previously hidden east window in the north aisle was opened up. A crude covering of plaster was removed from the nave ceiling and old ribs and bosses restored. The box pews, screen, gallery and high pulpit were replaced with an oak pulpit, lectern and chancel seats donated by the friends and family of the Revd. James Richey (the former rector). Rebuilding the porch revealed a broken medieval holy-water stoup and an image niche over the doorway, later filled with a carving of St George. The cost escalated from an estimated £750 to £1255 as work progressed but it was covered by donations from well-wishers and the fund-raising efforts of the parishioners.

Music had for many years been provided by a church band of stringed and reed instruments. The accounts mention a violincello and a hautboy (oboe). At the time of the restoration an organ made by Bridgeman of Ilfracombe, with unusual black natural and white raised keys, was installed by the rector, the Revd Henry Dyke Acland, and this is the instrument we have today. 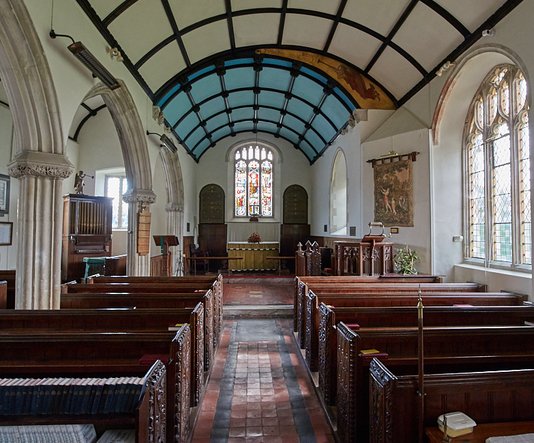 End of the Independent Parish

In 1943 it was decided that the 700-year-old parish would be amalgamated with South Molton, so on the retirement of the last rector, Lt Colonel the Revd. Thomas Keogh, Nymet St George church became just a dependent chapel. The marriage register has an entry after 9 March 1943 announcing: “This and the duplicate register are disused at this point by direction of the Registrar General”. The parishioners had to mobilise to raise the cost of a licence to recover a right to perform marriages which had existed for seven centuries. Rather curiously, every faculty for work on the church since that date has continued to refer to the “parish church".

Spot any mistakes?  Got any news or event in the village you would like posted...  email Jon Ride